1. Identify the social function of descriptive text in describing a historical place.

Penjelasan: Descriptive text is a text which aims to inform the readers by describing a particular place, thing or person more details. Thus, based on the option, the social function that is similar with the explanation is to describe a historical place to the readers.

2. Find the correct sentence which mention the location of a historical place.

Penjelasan: “The palace is located in Greater London” is the correct answer because it mentions London as a name of city in Europe that refers to the location. Besides, there is the word “located” to tell a place.

3. Complete the sentence below by using the proper adjective.
Visitors are …. by the beauty and luxury of the palace decoration.

Penjelasan: Amazed is the proper adjective to complete the sentence because it refers to someone’s feeling of awing something. Based on the sentence, the writer describes how beautiful and luxurious is the palace decoration.

4. Listen the audio to identify the year when Monas was opened for public.

Penjelasan: This kind of information included into identification and based on the audio the speaker tells that Monas was built in 1961 and opened to the public in 1975. Thus, the answer is 1975.

5. Listen the audio again to analyze which place the public visitors can enter it.

6. Identify the sentence below which included description.

A. The museum is located near the government offices building.
B. The palace was built by King Rama I in 1782.
C. There are so many chances to know the story.
D. It was begun around 10th century.
E. The castle has 145 rooms, 1,000 acres of gardens and a lake. ✓

Penjelasan: Description is a part which gives information more specific such as the parts of place and its characteristics. Based the options above, “the castle has 145 rooms, 1,000 acres of gardens and a lake” included into description because it describes the parts of a place by telling that while the others describe about identification of a place.

7. Choose the proper word to replace the underlined word in the sentence below.
Gedung Merdeka becomes more renowned after Asian African Conference (KAA) in 2015.

8. Read the text below to determine what part of the short paragraph below
Borobudur temple has many Buddhist sculptures. A large ‘stupa’ will be found in the center of the top circle for each edifice.

9. Read the text below to analyze the main idea of the text.
Buckingham Palace which is located in the City of Westminster is known as the London residence. It was subsequently acquired by King George III in 1761 as a private residence for Queen Charlotte. It is called as "The Queen's House".

10. Construct the following sentences into a good paragraph.
Select your answer

Penjelasan: Remember the generic structures of descriptive text which is begun by telling general information in the first paragraph that is called identification. Based on its generic structures, the correct order to make a good paragraph is: The Colosseum stands in Rome, Italy. It is the largest and most famous amphitheater in the Roman world. It was stunningly built in Flavian dynasty in 72 AD. Its construction is very beautiful and awesome. The Colosseum is very big and can accommodate spectators around 50,000 people. It has also no less than 80 entrances. To protect spectators from the rain and heat of the sun by sails called the “Velarium”

In this lesson you will learn about understanding descriptive text in describing historical places. 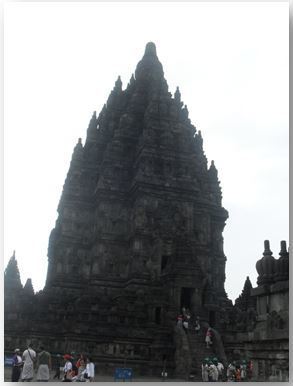 Look at the picture above. Have you ever visited that place? What’s its name? Why do people like visit this temple? Most Indonesian people know this place because it is one of historical places in Indonesia.
In the previous lesson, you have learned about describing people and thing. Now, in this lesson, you will focus on how to understand descriptive text in describing historical places.

There are a lot of historical places that have stunningly beautiful buildings. Many visitors around the world are interested in visiting historical places to see the buildings and know its history. When you want to visit one of the historical buildings, you may look for some information by reading some articles.

But, how to understand a descriptive text in capturing its meaning? Let’s take a look to the definition, social function, and generic structures of descriptive text below to remind you from the previous lesson.

Descriptive text is a text which describes a particular thing, person, or place.

Descriptive text aims to inform the readers about a particular thing, person, or place.

There are two generic structures of descriptive text as follows:

Identification is a part which identifies the phenomenon. In this part, you can tell about the general information such as the location of the place, where did you find the place and the reason why it can be a historical place by telling the history briefly. You can add your opinion or view about the place by using adjective to get the readers’ attention.

Description commonly tells about the characteristic of the place. It contains things that the writer wants to tell about the place specifically.

There are several language features that should be noticed as follows:
Now, read an example of descriptive text below.

Prambanan temple is a wonderful Hindhu temple built in the 10th century under Rakai Pikatan and Rakai Balitung, king of the second Mataram dynasty. It is located in Yogyakarta, Central Java, Indonesia.

Prambanan temple has three zones; The outer zone, The middle zone, and The inner zone. But, most people only know that Prambanan temple has three main temples which relate to God namely Vishnu, Brahma and Shiva temples. Shiva temple as the highest temple is located in the middle. Different with others temples, it has three main rooms and in the main room stands the states of Durga (Shiva’s wife), Agastya (Shiva’s teacher), and Ganesha (Shiva’s Son). Related to a Javanese legend, Durga statue is identified as the statue of Roro Jonggrang. Visitors can discover many things in Prambanan, but they should be careful while entering a temple which was damaged because of earthquake.